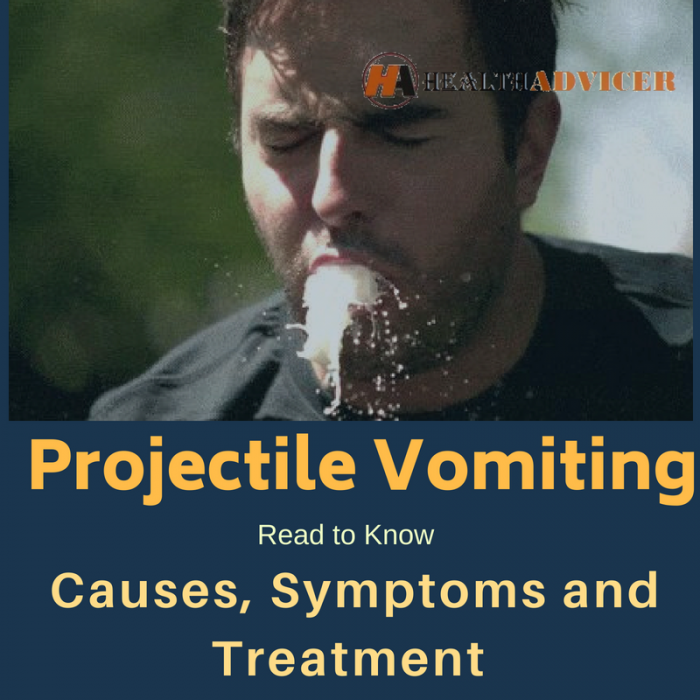 We have all been through those times when we are constantly feeling nauseous but that is all relieved with a burst of vomiting. Hasn’t that happened to you?

I am sure you all must be acquainted with that feeling that relieves us from that nausea.

This is what usually comes to our mind when we talk about vomiting. But is this it?

Do you think you will always get those early signals of nausea and uneasiness before you actually get up to vomit?

Well, let me warn you that this may not happen in all the cases.

Sometimes, the body just throws the stuff out and you are left wondering why did this happen. This is the exact case with projectile vomiting.

Let us explain more about it to give you a clear idea of what is Projectile Vomiting and how you may cure it.

Projectile vomiting is the most severe form of vomiting which is forceful and sudden in its very nature.

This is a kind of vomiting which comes with no prior indication and is usually propelled a few feet away from the body.

It exerts so much pressure on the stomach and exists so violently and suddenly that even hurts the throat.

It is actually different than other types of vomiting. Wondering How..?

It gives no warning. No warning means literally no warning. At a moment you will be sitting normal and the other moment you will find yourself puking in the washroom. Even if you get a minute of nauseous feeling to consider it good to have been warned otherwise at times you might not even get the chance to get up and reach the vomiting stage to throw it out.

The short and violent bursts just give us a second of nauseous feeling before we realize we are actually propelling out the stomach content with such force.

This is a kind of defense mechanism of our body. In this, the body is actually trying to get rid of something harmful and foreign.

This type of vomiting is often linked to the body trying to get rid of something harmful. This can range from a toxin, such as alcohol to bacteria.

It is equally common in both infants, children, and adult. The reason obviously is vastly different but the occurrence is more or less the same.

Let us see, what could be the reasons for the encounter with projectile vomiting at different ages.

The potential causes of Projectile vomiting in infants and children:

Pyloric stenosis is a condition where stomach muscles get thick which blocks the movement and digestion of food and deviates the process from its natural course. In this condition, the child is usually vomiting the small amount of milk after feeding which later turns to projectile vomiting.

The symptoms are- less pee or pooping by the child because the body has been dehydrated and digestion is not taking place in the normal way and the food is being thrown out.

This makes the child week and lethargic. The diagnosis is made by the doctor by feeling a lump in the belly or an ultrasound scan.

The condition usually prevails at an early age of 3 to 5 months of an infant.

The treatment to cure pyloric stenosis is surgery. It is not something to very much concern about. The surgery is anesthetic and is low risk. After this, the child will regain the strength and take to normal growth.

After this, the child should be fed small portions of food and in some time is ready to go back home.

Reflux is a condition where a reflux of acid back to the esophagus causes the infant to vomit. This is common with infants and is usually referred to by the term GERD (gastroesophageal reflux disease) (GERD)

The symptoms are- propelling yellow or green fluid, difficulty in breathing and the refusal to food. In these cases, the child would be seen throwing out suddenly with pressure.

Other reasons for causing projectile vomiting in children could be swallowing something which blocks the stomach and prevent it from emptying in a natural way.

if you feel this may be the case with your infant, then take him to a doctor ASAP. The doctor will scan the object and will start with treatment to get it out of the body.

Infection is as common in infants as it is in adults. What is an infection? It is the body’s way to take the harmful viral, bacterial toxins from the body.

Sometimes, the body’s way of dealing with infection is through projectile vomiting. If this is the reason, then the infant must be having symptoms like diarrhea, fever, and abdominal cramps.

The treatment of infection is simple and it usually works the same way in both infants and adults.

This is very common in infants and is the least dangerous of all the other causes.

What happens is, the infant eats as much as it is being fed and this can be over the limit at times as parents may not at times be able to identify the right amount of food the infant needs.

This leads to overeating and as the stomach does not have enough room for it, this leads to vomiting which is forceful and sudden.

In this case, the child should be fed in smaller portions and should be made to burp after every intake.

Infection is the body’s way of defense against viruses which causes problems like gastroenteritis, an inflammation in the body.

If projectile vomiting is the way of body’s mechanism then it will be accompanied by symptoms like nausea, diarrhea, and abdominal pain and dehydration

After projectile vomiting, in this case, the mouth feels dry, the body feels dizzy and weak, and urination is lessened and headache.

Treatment; Drink plenty of water and other fluids like juices and also green tea which will remove toxins from the body. Take medicines to throw the virus out of the body.

Influenza is another form of viral infection which is present in the air and reaches the body through the nose or mouth. This leads to a condition like cold only.

The symptoms are fatigue and cough. To make this go away you can take to over the counter medicines like acetaminophen (Tylenol).

The inflammation in the gallbladder could be one reason for projectile vomiting.

This happens when the bile juice present in the gallbladder gets thick and form stones which makes it difficult to digest food.

Once diagnosed with gallbladder infection, you should immediately take to treatment which may include surgical removal of stones or medication.

is a form of stomach infection that sometimes get very severe.

This may lead to the formation of harmful bacteria in the abdomen if not treated timely.

The symptoms are stomach ache accompanied by loose and frequent stool. In this case, the projectile vomiting is very frequent and sudden.

The presence of antibodies against EBV confirms the infection and is one rare reason for projectile vomiting. The virus is not very common and hence you may not be aware of its symptoms and proper treatment which we are going to tell you.

The symptoms include – fever, sore throat, and swollen lymph nodes.

The Treatment includes medication such as – antipyretics, and analgesics, such as acetaminophen and ibuprofen. Also, the body should be put to complete rest to avoid the situation from getting any worse.

Some parasites can also be the cause of projectile vomiting. You may have to get in touch with these parasites by drinking or swimming in contaminated water.

The symptoms are similar to those of any other infection like fatigue, nausea, stomach bloating, dizziness and diarrhea.

If you are having symptoms like nausea, vomiting, and diarrhea, headache, abdominal cramps (stomach cramps), dizziness, then consider it an early signal of food poisoning.

It is common for people who have weak immunity and are not used to different types of food.

The most common reason for food poising is eating food outside the home, or eating too spicy food which you are not used to. Another reason is eating improperly handled, expired or unrefrigerated food.

The treatments are simple and may not even require the doctor’s attention. Over the counter medication like loperamide (Imodium) would do but you have to rest the stomach and eat very plain and bland food is accompanied by a lot of fluids intake.

Other common causes of projectile vomiting:

Other common causes of projectile vomiting are:

Apart from this, there are several other symptoms of projectile vomiting:

These are all general symptoms of Projectile vomiting which we all come across at some point in our lives, which is easy to cure even at home but on a certain level the things get out of our control and that is when you need to see a Doctor.

Home care to treat projectile vomiting in case you are having any of the above symptoms:

Hydration is the key to restore the normal body status which has been disrupted due to vomiting. If you are able to keep fluids in your body and not throwing them up in a reflux you should start with this immediate treatment. Drink water, if the mouth tastes acidic drink flavors like lemon water, iced tea and if you are feeling week make up for the lost electrolytes by drinks like Glucose, Pedialyte or Gatorade

Give your body some rest if diarrhea or food-poising are the cause of projectile vomiting.

Take to bland and healthy food- In the initial stages avoid eating at all and make up for it by having juicy fruits and salads and then turn to healthy eating like Khichdi or oats with no or little spices to not upset the stomach further.

In certain cases, you can take to over the counter medication which can help stop vomiting.

If you are facing all these symptoms then you need to take to special attention without any delay and see a doctor.