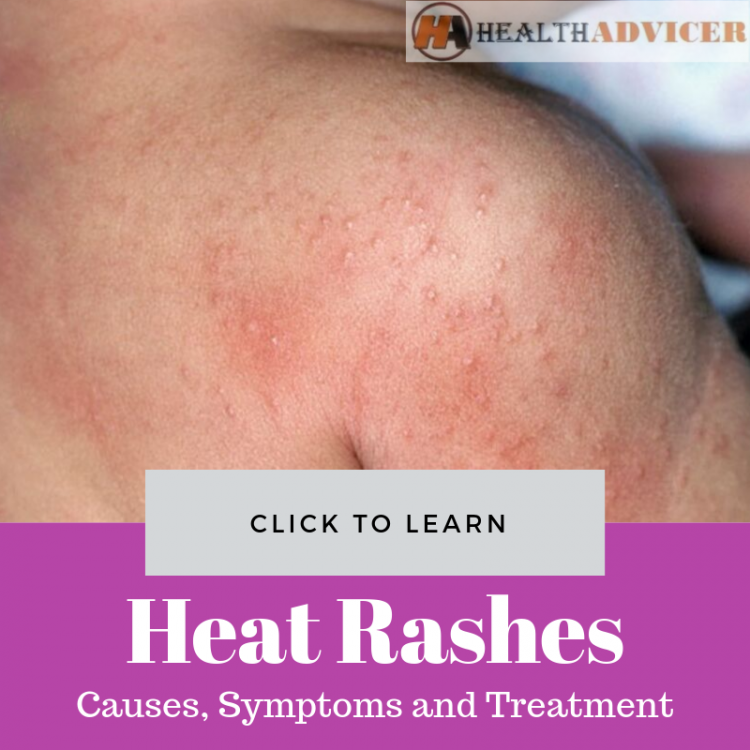 Healthy skin is a reflection of overall wellness. A shining and glowing skin irrespective of color and free of any damage is the sign of good health.

Could anybody think of better clothing to the thousands of bodily parts than the skin? The answer is no. The skin apart from covering and protecting the body from various external conditions also has many functions.

Sweating from hard work is a sign of good skin and also good for a healthy body. Sweating maintains body temperature. Rashes can occur if sweating by heat is blocked.

Sunlight is the main source of Vitamin D but when overexposed could cause rashes. For those who believe that beauty is only skin deep and for others to have a glowing skin free of rashes continue reading.

Rashes to the skin due to heat are called Miliaria. This medical term is used to the blockages of sweat glands and causing rashes on the skin. They are mainly formed on the face and neck of the human body.

Sweat glands are the main part of the skin which causes sweat. The blockage of the ducts in the sweat glands causes rashes.

Sweat glands are tubular in structure and of two types:

These glands are found all over the body and are the main reason for the heat rashes.

Heat rashes on the skin are mainly due to the heat. Heat is the energy transferred from one system to another as a result of thermal interactions.

Hot temperatures of the summer days can make anyone uncomfortable due to the unbearable heat. Due to overheating a number of heat-related illnesses occur to the humans including heat rashes.

Because of the heat, Miliaria or the heat rashes occur on the skin of the human body.

Miliaria or heat rash is a condition that occurs due to the obstruction of the sweat ducts. This obstruction is due to the excessive sweating because of the unbearable heat of the surroundings.

It affects nearly 15 % of newborn babies. And also there is no age restriction for miliaria to occur. Miliaria does not occur around hair follicles like acne.

This kind of heat rash appears as small, clear and superficial blisters. While bathing or friction these blisters break easily. This is the mildest form of rashes which affects the ducts on the top layer of the skin.

This form of heat rash commonly occurs to the following persons:

In worst and chronic recurrent cases the bumpy spots can turn into pus-filled spots. The vesicles or sacs are filled with pus and hence called pustulosis.

The one happy thing about this kind of heat rash is it is not itchy but is formed in the deeper layer of the skin in the form of red or white lumps.

This is very rare and is found in persons who relapse to Miliaria Rubra.

The rash is a change of the human skin which affects its color, texture, and appearance. It may also cause itching which could be unbearable. The itchy rash is called allergic contact dermatitis.

Rashes do not discriminate age or sex. Almost everyone should have experienced a rash at some point in time in their lives. Some rashes are for a very short time and some exist for a longer period of time.

The heat rashes may occur on all part of the body due to the eccrine sweat glands. But the heat rashes are more focused on the part which are exposed to heat like face, neck, and hands.

As per the name, the heat rashes are mainly caused by heat on the body surface. The sunlight in the morning is rich in vitamin D. This is the only natural resource of Vitamin D which is very essential for body functioning.

But when the ultraviolet or the UV rays are overexposed on the human skin it causes a lot of skin ailments including heat rashes.

Some persons may experience over sweating which takes time to evaporate. This causes the ducts or the tubular structures connecting the eccrine glands to the skin surface to be blocked.

This blockage or clogging of the ducts and the sweat glands overtime cause rashes. In severe cases itching, pricking and pain are also experienced in the rashes.

Hard work involving too much physical activity, heavy or intense exercises, and any other activity which causes severe sweating cause heat rashes.

The sweating on evaporation causes the coolness of the body. But on overheating due to the hot working environment, or in humid conditions which cause overheating of the body could be the cause of heat rashes.

Fever for a prolonged time because of an underlying ailment also could cause rashes.

Obesity causes more skin to skin contact because of the large body mass. This friction due to the frequent skin contact could cause heat rashes.

Changing over to tropical climates for a long period of stay or permanently could lead to heat rashes.

Some heavy creams and lotions applied on the skin may block the sweat glands and the ducts and could be the cause of heat rashes.

Occlusion is the closing of the sweat glands and the ducts due to the clogging or blocking. This is because of the following reasons:

Transdermal patches are put on the skin to transmit some kind of. medicines to the bloodstream of the affected bodily part.

Some clothing with nylon, rayon, Kevlar or any synthetics has more risk of heat rashes.

Also, training and defense dresses could cause heat rashes.

Lack of acclimatization or adjusting to the change of climate, altitude, temperature, humidity, and others can also cause heat rashes.

Morvan syndrome is the defect in the CNS or the central nervous system disorders which causes insomnia, weight loss, hallucinations, pain, hyperhidrosis, and other issues could cause heat rashes.

UV or ultraviolet radiation in some cases cause heat rashes.

Certain intake of drugs can cause heat rashes.

These drugs which promote sweat cause heat rashes.

Miliaria crystalline has been found when these drugs are administered into the human body.

Some bacteria like Staphylococcus epidermidis and Staphylococcus aureus are associated with miliaria. They form biofilms and block the sweat glands and hence play a role in the pathogenesis of miliaria.

Causes of Heat rashes on babies:

The newborn babies are the most affected ones due to the heat rashes. The new environment for the babies and the immature development of the bodily parts are the major reasons.

The sweat ducts of the newborn born babies are not fully developed. It could easily be ruptured causing the perspiration trapping beneath the skin.

This is more common in the first week of birth. This is because of the following reasons:

Symptoms of heat rashes are the rashes which can occur all over the body and in some cases localized. The symptoms are according to the characteristics of the rashes.

Salt which is the main content of sweat can cause potent skin irritant and skin rashes.

The different types of rashes:

The different parts where heat rashes occur in the body:

When the rashes are severe for the following reasons it is time to see a doctor.

Since heat rashes are easily visible to the naked eye it could be self-diagnosed and treatment is taken. But in some cases where it persists with many symptoms, it is time to diagnose the heat rashes.

The doctor can question the change of environment, exposure to heat, physical activity among others to evaluate the reasonableness of rashes.

The doctor could also perform a simple diagnostic test by inserting a needle to rupture the blister and examine the fluid or sweat accumulated there.

The skin scrapings are collected to conduct microscopic examinations.

Depending on the cause of the rashes a skin culture test can also be done.

Biopsy of the skin could be advised to rule out the other conditions that are similar to that of heat rashes like toxic, neonatorum, neonatal cephalic, erythema, candidiasis, Grover’s disease, pustulosis among others.

To rule out the possibility of the secondary infections swab test can be done by the doctors.

In some cases, patch tests are conducted to eliminate the possibility of any allergic reactions to substances applied on the skin.

Rashes may cause stress to some patients and hence blood tests are conducted to evaluate the development of heat stress syndrome.

Heat rashes are mainly due to the surrounding hot conditions. Once you move to the cooler environment this could be recovered uneventfully. Prevention is the best treatment as far as heat rashes are concerned.

Food habits coupled with proper lifestyle could be a safe treatment option for heat rashes. The right foods to eat and to avoid are the key to the natural remedy for heat rashes.

For any ailment, the foods to be avoided are best known to the sufferer of the ailment. Over time the awareness in eating which causes the increase of the rashes could be known. This is the vital element in avoiding the foods which could differ from person to person.

Most common foods which are not suited not only for rashes but for many other ailments are the following ones:

Many processed foods contain additives to prolong the period of usage and also dyes to enhance the color of the food. These not only cause various ailments but are allergic to rashes as well.

Fried foods are the worst enemy of many diseases across the world. The oil and many ingredients in the fried foods cause inflammation and thus increasing the rashes.

Some people are allergic to conventional dairy foods and hence avoid them to reduce the heat rashes.

Foods which are rich in certain ingredients which reduce the rashes because of heat could be taken for a better living.

Switching to organic foods is the order of the day. The fewer toxins and chemicals reduce and heal the heat rashes.

Researchers have shown that beta-carotene improves resistances to rashes triggered by the sun. Eating beta carotene-rich foods could control rashes.

The oil is the main ingredient of the food that could help in healing and reducing the ill effects of rashes.

Oils which are not heated above 129 degrees during pressing is suitable for reducing rashes. Olive and coconut oil are the best choices.2

Protein is essential for the proper functioning of the human body. Clean lean protein helps the immune system and guards against infections that cause rashes.

Medical treatments for heat rashes depends on the severity of the rashes and also the patient’s allergic tolerance to the medicines.

OTC or over the counter medicines are easily available for the treatment of heat rashes. Tropical creams can be applied to the affected parts for treatment.

There are two types of topical creams.

Hydrocortisone is one steroid topical cream which is commonly used to treat heat rashes. This is avoided for long-term use because it causes thinning of the skin.

Patients who do not absorb the steroid topical creams to penetrate their skin or the affected areas use non-steroidal topical creams.

Skin-soothing lotions like calamine lotions could be applied to reduce the effects of rashes.

In the case of secondary infections of the rashes antibiotics and anti-inflammatory drugs are administered with the supervision of doctors.

Supplements which are rich in the following essential ingredients could be taken to reduce rashes;

Treatment of infants for heat rashes:

Newborn babies and infants are the worst affected by heat rashes. This can be prevented and treated by the following ways:

Keeping the skin free of heat rashes or of any other kind of damages to it is very important. This is because it is the only clothing available to thousands of bodily parts.