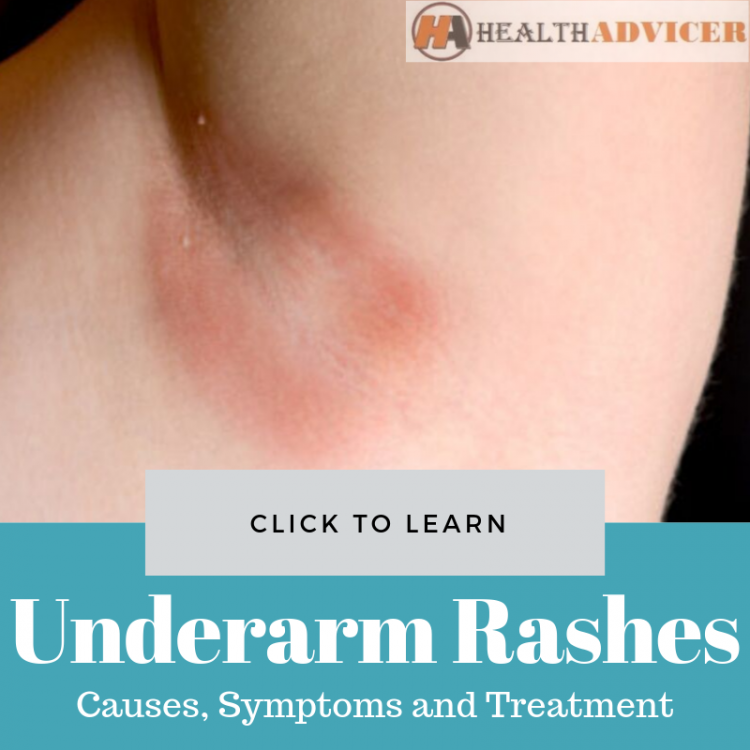 Underarm rashes are like undercover agents causing suffering to the humans. The agents could be fungi or bacteria finding a warm and moist niche in the armpits. Underarm rashes cause itching and irritation apart from the change of skin color and texture.

Imagine a situation of scratching your underarm in a meeting. This awkward situation could be avoided by reading the article until the end.

Reasons of Worrying about Underarm Rashes:

The reasons for underarms could be many from heat to fungi but the problems because of it are the same. The red rashes could be even the indication of the contact with HIV at the initial stage.

The change in atmosphere or being exposed to unhygienic conditions or using the wrong soaps and body sprays could cause underarm rashes.

But since there is no reason for an underlying ailment for underarm rashes except in cases of HIV it is easily treated by self and with simple home remedies.

Proper knowledge of the cause and its prevention could be the only solution to stay away from these irritating and stressful underarm rashes.

Types of Underarm Rashes as per their Causes:

Understanding the problem is half solving it. This could be an old adage but promptly applies to underarm rashes. There are several types of rashes depending on their causes.

The causes could be simple and easily avoided to prevent re-occurrence and treatment. The reason for each may be different but the rashes are present.

Depending on their cause the underarm rashes have been classified into the following 8 types.

Heat rashes are the most common type of rashes and the reason as per the name is only heat. Exposed to overheat and sudden change of environment too hot demographical locations could cause heat rashes.

Even increased physical activities in hot and humid conditions get cause heat rashes. This is more in the case of those who have to strain out in the heat for a living.

Because of the flow of liquid and blood, many fear it could be transmitted to close family members or others. Luckily Eczema is not a contagious disease. Hence there is no reason for such fear.

The rubbing of clothing over the chafing rashes adds fuel to the fire. Hence proper dressing, staying dry, lubricating the rashes and avoiding activities which could cause chafing rashes is the only solution to it.

Contact dermatitis is formed on the superficial regions of the human body like the armpits. This is caused by any contact with these regions to any kind of foreign substance which are allergic.

This allergen could vary from person to person and should be identified and avoided to prevent and treat contact dermatitis.

Pregnancy could also be a reason for underarm rashes. The hormonal changes in the liver trigger skin aggravation and causes impetigo and skin inflammation.

The Candida Albicans are the culprits to form candida or the fungal infection in the armpits and other parts of the body to cause rashes.

These fungi take refuge in the warm and moist niches like armpits and cause severe damage to the body.

The following are exposed to candida very frequently

Folliculitis rashes are caused by the infection and inflammation of the hair follicles. Staphylococcus Aureus bacteria is the culprit in forming this kind of rashes.

The hair follicle is the organ responsible for hair growth and consists of 20 different cells. Folliculitis is more common with a shaving of the armpits. There are two types of folliculitis:

This affects the part of the follicle and is less severe in condition.

This affects the full part of the follicle and is deep enough to create severe pain and suffering.

These two types of folliculitis have different forms according to the causes.

Pseudomonas Folliculitis or hot tub folliculitis is caused by Pseudomonas bacteria. This kind of bacteria is mostly found in hot tubs among other places like heated pools which are not maintained properly with chlorine and without proper pH levels,

Staph bacteria when infected live on the skin all the time. This is the most common form of Folliculitis. They enter the body through a cut or wound and cause rashes.

The dark raised scars on the groin area are called barber’s itch. The other names of barber’s itch are Razor bumps and Pseudofolliculitis barbae.

The close shave of curly hair on the face, neck armpits and other parts cause these rashes. This is also caused by the bikini waxes applied on the skin in the groin area.

This type of rashes is formed by yeast infections. They produce chronic, red, itchy pustules on the chest, back and sometimes on the armpits, necks and other parts.

This severe folliculitis is in the following forms:

If you are taking long-term antibiotic therapy for acne you are prone to this folliculitis.

This type affects people who have begun to shave their hairs in the body.

When the staph bacteria infection is very deep and for a considerable period of time in the skin furuncles or boils and carbuncles appears on the skin in the form of painful pink or red bumps.

This type of folliculitis mainly affects AIDS patients. The intense itching, pain and recurring patches are the features of these rashes.

If the underarm rashes are untreated for a prolonged time or living with it in unhygienic conditions could cause secondary infections and could have the following symptoms which need medical attention immediately.

The treatment of underarm rashes depends on the cause of it. Once the cause is identified treatment can be given without any delay. Since the suffering and discomfort is more than any severe life-threatening diseases the treatment is very simple and fast.

The treatment could start from home and only on severe conditions doctor should be consulted for avoiding secondary infections and for underlying ailment check.

Move to a cooler place:

For any kind of rash heat is the first enemy and for heat rash, it is the cause of it. Hence moving to a cooler place or living under air-conditioned rooms or under the circulation of air by a fan is important.

Frequent cleaning of the affected area:

A cool compress of rashes:

The effect of ice cubes on the rashes could bring in the feeling of being in heaven. Only those who have experienced it could understand the meaning.

The cool compress effect is more useful for heat rashes and for lichen planus. The lichen-like rashes are formed on all parts of the body. This is a chronic inflammation of the skin.

This cool compress is done in the following manner:

Exercises are good for a healthy body. But rashes could be a sign of overdoing it. Hence exercises which could cause a lot of sweat in the armpits should be totally avoided.

Meditation, deep breathing (Pranayama) and other mind relaxing activities should be performed. This could differ from person to person but everyone affected by rashes should relax both mind and body.

Food which is good for one person could be allergic to another. This is not because of the food but the response of the human body to it. This awareness will reduce a lot of ailments and especially for controlling and preventing rashes.

The ingredients of certain foods will cause rashes and increase the annoying itching.

Any allergic reactions and immediate rashes should be treated within 72 hours or could be dangerous and life-threatening in some cases.

Some soaps and detergents we use could be harmful and increase the rashes. The ingredients in them may be allergic and hence should be totally avoided.

Applying talcum or baby powder in the armpit:

It is safe and essential and that too in the moist and warm area like the underarm. Applying talcum or baby powder daily even without rashes is advisable.

Avoiding tight-fitting dresses and that too in hot weather is important. Choosing the right fabric which is of made of natural fabric is also good for avoiding crashes. It is better to wear a dress that causes chafing.

Consulting a doctor when the rashes are more severe is important. Before that OTC medicines and other supplements rich in certain vital ingredients is very important to keep the body safe from rashes.

Some medicinal treatments for underarm rashes:

OTC medicines or the over the counter medicines are available around the world to cure rashes. They are in the form of creams and lotions.

Some home remedies which are easy and readily available is good for the treatment and prevention of the heat rashes. This could be useful for the whole family not only for underarm rashes but also for general health.

Eating vitamin C rich foods is the basis for keeping an healthy skin. Oranges, gooseberries and many natural fruits which contain vitamin c should be taken on a daily basis to avoid underarm rashes.

Oils of Olive, coconut, tea tree and even Neem, Lemon, and many other home remedies are good for treating underarm rashes.

Understanding what causes underarm rashes and being aware of it is the best way to prevent them. The awareness of our body is the basis for keeping good health and preventing a lot of diseases like underarm rashes.

Underarm rashes are common complications of the body condition which could be easily treated and prevented in daily life.

But underarm rashes caused by allergies if you have other symptoms besides your rashes. They are swelling of the face and throat or having difficulty in breathing could be serious.

Underarm rashes are a mess in social and professional life. It could cause not only discomfort but also an embarrassment. This apart from bodily suffering could also cause stress which could affect normal life.

Hence to keep the body and mind in a sound condition is the best way to keep underarm rashes away.

I am S.Vijayan. I am an English graduate with teaching as profession. I am 49 years old and a diabetic by genetics. I control my sugar levels by proper lifestyle and food habits. I am an abhyasi of SRMC or Shri Rama Chandra Mission and Charities for the past 8 years. I do meditation and travel on holidays to all the centers of SRMC. I have a passion for writing and believe in survival of the weakest.