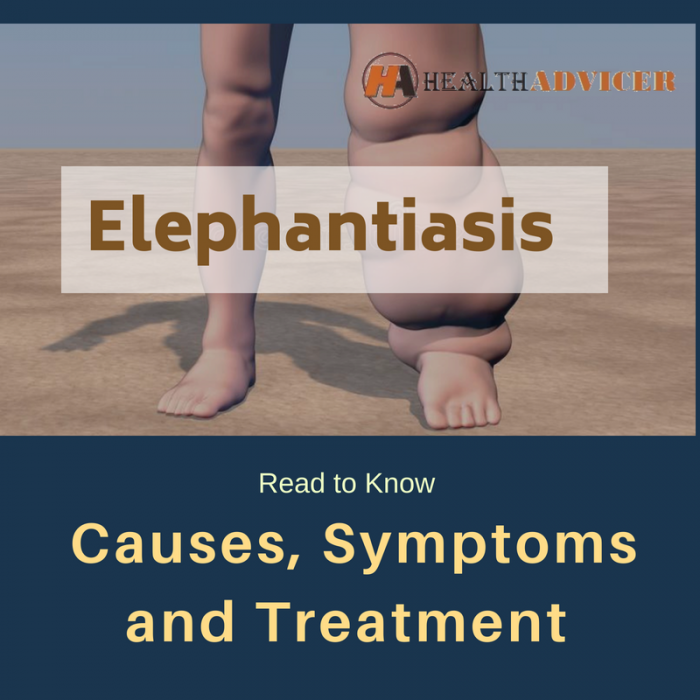 Elephantiasis is the disease which is a medical elephant in the room for African and South East Asian countries. The lymphatic filariasis which on chronic conditions develop to elephantiasis has the main symptom of the human skin turning into that of an elephant skin with swelling to match its size. Muscles bulging due to exercise is hard work but the swelling of the limbs and its hardships due to elephantiasis is too much to bear and even risk to life. Hence if you are living in a tropical or subtropical country or visiting there for a long period and don’t want your genitals to become the size of a baseball or bigger read this article till the end.

Elephantiasis is caused by mosquito bites and those countries where the mosquito is part and parcel of life, elephantiasis is common. There are a total of 140 million people affected by elephantiasis in 52 countries of which one third or 40 million in a severe condition of disfiguration and incapacitation. Of this 40 million people 25 million are affected by hydrocele and 15 million with lymphoedema. The sharing ratio of this is one-third Indians, one-third Africans and the balance one third between the Americans and the people of countries in the other South Asian and Pacific region. This shows the severity of the disease in tropical and subtropical countries. This is why it is considered as the neglected tropical disease or the NTD.

The study of the spread of lymphatic filariasis or the epidemiology of elephantiasis involves the nexus between the mosquitoes and three filarioidea type parasitic roundworms which are as follows :

Wucheria banrofti is transmitted by Anopheles, Culex and Aedes mosquitos and Brugia malayi is transmitted by Anopheles and Manzonia mosquitoes. The female mosquitos are the culprit vectors here with the infection of the first stage of larvae which is the stage between the egg and the worm develops into the third stage larva and when this is injected into the blood of the humans they stay there for a long time and with coalescence of the effect of the worm in the blood and then into the lymph system for approximately for 6 to 8 years producing more microfilariae or the immature larvae slowly and steadily to cause elephantiasis. The whole process is again repeated as soon as the mosquito feeds on the infected humans and then on others to spread elephantiasis to a large extent.

The mosquito bite infected with parasitic nematodes are the main cause of elephantiasis. The Elephantiasis syndrome caused by these infectious bites are the cause accumulation of adult worms in the blood vessels which affect the lymph system. The lymph system of the body is responsible for waste management. They release the waste and toxic substances and if they are blocked the lymphatic fluid is retained in the body to cause swelling and thus causes elephantiasis.

The other causes are :

This longstanding disease in humans is caused by the gram-positive bacteria Streptococcus pyogenes of the Strepto A Group A and of the fungi Sporothrix schenckii. This causes swelling and infection in the lymphatic channels.

This is caused due to the disorder of the immune system by the minerals and particles absorbed by the foot while walking in barefoot. This affects the lymph vessels of the human body.

This is a sexually transmitted filariasis which affects the sexual organs of the human body. This disease is caused by invasive serovars L1, L2, L2a or L3 of Chlamydia Trachomatis bacterias.

Also called as Lymphatic Edema is one of the genetic disorder and also due to complications in treating blood cancer. The fluid retention and recirculation into the blood cause this kind of disease which is incurable and progressive.

The trauma of surgery to treat cancer

The causes of elephantiasis or lymphatic filariasis may be many but the end result is damage to the human body and depression and anxiety to the mind because of the disfiguration and related effects leading to poverty.

The most dangerous about elephantiasis is in most cases it is asymptomatic or does not show any symptoms at all until they damage the kidneys, lymph, and immune system. This is the first stage of symptoms and it is very slow and takes 6 -8 years because of the slow development of larvae into adult worms in their accumulation in the blood vessels and restrict the blood circulation and cause fluid to be retained in the surrounding tissues.

For those who are lucky enough to get the following symptoms in the acute and chronic conditions are:

The other symptoms are the frequent pain in and around testicles, fevers, and chills in the body.

The treatment starts with the proper diagnosis of elephantiasis.

The diagnosis involves the following :

Blood Test which is done at night time because the parasites or microfilariae is active nocturnally only in the night. Blood tests are done by smearing and staining the blood with Giemsa stain to diagnose elephantiasis.

X-rays and ultrasound tests are done to prevent misdiagnosis of other diseases like river blindness. This is because of the common symptoms or the source and vectors being the same for these two diseases. Elephant man disease should not be misdiagnosed with elephantiasis since it is completely different in the symptoms and the source.

Acute and chronic elephantiasis often lead to distorted mental health, social stigma because of the appearance which both lead to loss of earning capabilities and opportunities and when combined with the medical along with caretaker expenses will lead to depression, mental anxiety and the end result of isolation from the society and living in poverty.

Hence treatment for elephantiasis is vital and the World Health Organisation or WHO have developed various schemes to eradicate elephantiasis. But the cause of it being natural by mosquitoes and parasitic nematodes it becomes highly impossible to totally eradicate the disease like other dangerous diseases like polio and measles with life-saving vaccines.

The treatment for elephantiasis involves the following :

The self-treatment or treatment at home is the basic treatment for elephantiasis. In some cases of elephantiasis, there is no need for medication as there are no worms in the system but the symptoms alone persists. These symptoms can be reduced by home treatment.

The basic home treatment is more important to prevent secondary infections because of the immune response to the parasites of elephantiasis. The secondary bacterial skin infections can cause acute adenolymphangitis episodes and progeria lymphoedema.

The basic treatment includes the following :

The medication of elephantiasis mainly involves the destruction of the worms infected in the body and controlling them. The various stages of development of the worm drop by drop over the years are the prima facie of medication of elephantiasis. The adult worms are the toughest to kill and are the main reason for the extremity of the elephantiasis involving permanent disability and kidney failure causing death. The symptoms like swelling and pain could be treated and controlled by the following medicines :

The ant parasitic drugs include

Diethylcarbozomine (DEC) kills some adult worms along with microfilariae Doxycycline is used to cure LGV and Azithromycin cures Donovanosis.

These drugs when used cause large scale of worms elimination which could trigger immunological reactions. This could cause muscle pain, fever, sore throat among others. For controlling this these medicines are used initially in a low dose along with steroids and anti-inflammatory drugs.

All the above treatments are only for the initial and early stages of elephantiasis diagnosed. These treatments kill the pathogen which affected the lymphatic system and makes it resume with normal functioning.

In the worst or severe cases of elephantiasis where the fluid build-up is large and could not be removed by curing with drugs resulting in hydrosol and disfiguration, the only final option is surgery to save the life. The surgery is done to drain the excess fluid and also reconstruct the disfigured and damaged body tissue.

For most patients who are affected by elephantiasis go under a stage of depression. They cannot accept the fact that a small mosquito has caused such a large damage. They anguish because of their physical state and its difficulties socially and economically. They think why this is happening to them without any fault of theirs. This mental depression and agony could lead to severe consequences if not treated with counseling.

The isolation because of disfiguration and mental stress can be reduced by support groups. The sharing of the suffering and the remedies to overcome them by discussing and communication will help in a huge way for the elephantiasis patients. The love and care shared are far more effective in curing the disease.

With the cost of medical expenses increasing everyday treatment of elephantiasis costs are too much to bear and that in a state where employment is nearly impossible because of the incapability due to disfiguration. In these circumstances, online resources are a shot in the arm for the patients to refer and treat themselves as per their conditions. It is always better to consult a doctor but for emergencies and prolonged illness online resources could be handy for patients in need.

Prevention is better than cure is an old proverb which holds ground even today in this technology-driven world. With no vaccines, till date to eradicate elephantiasis, it has become crucial to prevent elephantiasis rather than curing it. Just imagining the pain and suffering to go through when affected by the diseases will give the much-needed prevention measures to be carried out for any disease and in particular elephantiasis. The prevention measures could be categorized into three forms :

As per the old proverb if the fire is put out automatically the boiling stops. This gives way to prevent individually the cause of elephantiasis. If the vectors and the parasitic roundworms are controlled in the immediate vicinity of the living area could be the basic solution. Other ways are as follows :

GPELF or the global programme to eliminate lymphatic filariasis with a vision to eradicate elephantiasis by 2020 from the face of the earth and make it a better place to live was envisioned and implemented by WHO or the world health organization in 2000. WHO is spending billions of dollars to eradicate elephantiasis with the vaccine possibility being remote. The dollars spent not only saves the lives of people but also generates billions of dollars by preventing and enabling the affected people to come out of poverty and work for a better future. This involves various steps like :

The WHO’s preventive chemotherapy is MDA or mass-destructive administration of an annual dose of medicines to the entire at-risk population of or of the people living in the disease affected area. This annual dose comprises of all the three drugs albendazole 40 mg, diethylcarbamazine citrate (DEC) 6mg/kg and ivermectin 200 mcg/kg which is more effective in curing the disease within weeks.

The basic package of cure :

Apart from large-scale MDA the basic package of cure by WHO includes the following :

Lymphatic Filariasis caused by mosquitoes has disabled humans for centuries in the tropical and subtropical countries. The suffering and humiliation of the disfigurement and disability by humans could not be explained in words. The ultimate result of elephantiasis is isolation and poverty. Elephantiasis also causes kidney failure resulting in the loss of life. This at any cost should be avoided and WHO is doing its best to make the world a better place without elephantiasis. As individuals, we should be aware of the disease and its causes to be safeguarded and prevented from it to have a safe life. As an old saying health is a wealth we should live with awareness in a clean and sanitized environment to prevent not only elephantiasis but also from other diseases.