A backache is extremely common among people of all age groups. The reason for which could be many like too much exertion, slip disc, be sitting constantly or sudden exposure to chills.

In all these cases, a usual painkiller is enough to make the pain go away but there are rare cases where back pain is severe than it is usually considered.

Here, we are going to prepare you for those cases by telling you the symptoms and causes of Cauda Equina Syndrome (severe lower back pain case) to let you differentiate it from other pains and take required action ASAP.

We usually do not refer to lower back cases as ones where a surgical treatment would be required to cure the pain but in rare cases, severe back pain can be a sign of cauda equina syndrome (CES), a condition that requires urgent surgical treatment.

It is one of its kind medical emergency where the patient has to be operated to rid of the excruciating lower back pain.

So what is basically Cauda Equina Syndrome?

Cauda equina syndrome is a rare condition caused by an unusual compression of the nerves at the end of spinal cord roots within the spinal canal.

The term, “Cauda equina,” has a literal derivation which means tail of horse i.e. the end of the spinal cord in the lower back where it splits into a number of nerve tracts.

Compression of any of those nerves at the roots of the spinal cord can lead to severe pain which can be treated through surgery only.

These nerve tracts are responsible for the movement of legs, feet, and pelvic organs and damage to that can lead to permanent paralysis of the lower body.

This makes Cauda equina syndrome is a serious medical emergency which needs to be treated at the earliest through surgery to prevent any lasting damage to the spinal canal which can lead to cases like incontinence and permanent paralysis.

Cauda Equina Syndrome can even be caused by a minor pinching of the nerves at the end of the spinal cord however, it is difficult to differentiate symptoms of Cauda Quina Syndrome from a usual backache.

But since we have warned you against the severity of the case you must become proactive if any of the below mention symptoms appear.

The symptoms cannot be even generalized because their intensity varies according to the intensity of nerve tract compression and so the severity of the case.

So, people brace yourself up if you come across any of these symptoms which may indicate Cauda Quina Syndrome

So, if you see any of these symptoms you should get ultra-cautious and consult a doctor and get it confirmed by Tests like:

If the case is of complete cauda equina syndrome, all the above-mentioned symptoms would be faced.

Partial cauda equina syndrome which is a result of incomplete compression of the nerves and in which the above-mentioned symptoms would occur in varying degrees and combinations. 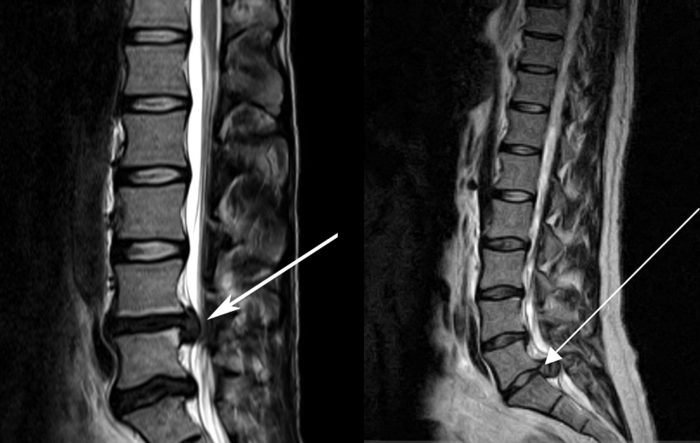 The compression of the nerves at the end of the spinal cord to the point of neurological disruption or damage leads to Cauda Equina Syndrome.

The causes for that compression could be different like:

Compression of nerves because of abnormal growths (tumor or cancer)

Localized lumbar tumors developed due to ependymomas, metastatic cancer, or Paget’s disease of bone can lead to Cauda equine syndrome.

Massive Herniation of intervertebral discs can lead to pressure on spinal cord which is one common cause of CES. This may be a result of excessive strain or injury of the disc. In aged people, the disc ligaments usually get weakened and even a minor strain or twisted movement can lead to the herniated disc.However, all the cases of herniated discs may not lead to CES. It is typically in 5% of the cases that disc CES is caused by herniation of disc or ruptures.

Infection near the spinal cord

Any infection resulting in pressure on the spinal cord can lead to lower back pain and eventually Cauda equine Syndrome. The reason for spinal cord infection could be many like:

The inflammatory condition of nerve tissues

Cauda equina syndrome can be caused by an overgrowth of inflamed tissues which exerts pressure on lumbar nerve roots leading to compression of spinal cord nerves. This could be a possible phenomenon in case of Ankylosing Spondylitis.

As the body ages, the muscles and ligaments holding the spine start to degenerate which causes spinal stenosis a condition in where spinal nerves in the lower back are choked which leads to leg pain and other symptoms.

Injury in the lower back

Any trauma to the Cauda Quina caused by an accident can lead to its damage. The reason could be a fall, a deep penetrative wound in the spinal cord or any forceful attack on the spinal nerves.

Birth abnormalities are responsible for Cauda Equina Syndrome in children.

A malignant infection which leads to tumor formation in the lumbar region.

Arteriovenous malformations in the spinal region which again is a birth defect leading to compression on nerve tracts.

Spinal hemorrhages such as subarachnoid or subdural

The idea is to prevent permanent neural dysfunction by treating the causes as soon as symptoms have been diagnosed. If not treated ASAP, CES can lead to permanent paralysis and incontinence.

A neurosurgeon performs this surgery and should be consulted promptly if you experience any of the above-mentioned symptoms. Usually what doctors suggest is to undergo a surgery within 48 hours of identifying the Syndrome. It would let the neurosurgeon eliminate most of the sensory and motor damages. However, if not treated within two days, the surgery could still be performed and will lead to considerable improvement.

However, a very rapid improvement should not be expected post-surgical treatment. The damage could have been severe and may take months to recover the sensory and motor deficit. So, the patient has to undergo constant medication and drug therapy including physical therapies to permanently eliminate the damage caused to the spinal cord. This may take as long as 3 months to 5 years.

If the infection was the reason for Cauda Equina Syndrome then the patient is put to antibiotics after the surgical removal of inflammatory tissues.

If a tumor is responsible, radiation or chemotherapy may be needed after surgery to permanently rid the spinal area of the tumor.

How to prevent Cauda equina syndrome? 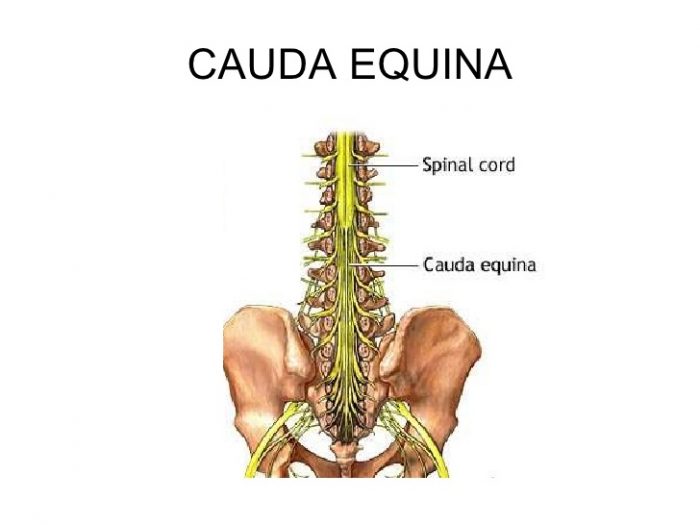 The conditions which lead to the syndrome are not predictable and hence there is no way to avoid them.

However, Cauda equina syndrome can be prevented from getting any worse by treating it in time.

So, it is advisable that as soon as you experience any of the red flag CES syndromes it is suggested to get it surgically treated to prevent it from making any permanent damage.

Post-surgery also, the improvement would not happen if you do not intake medication properly. So, the process of treatment does not end with the surgery but continued long after that which includes proper drug therapy and physical treatment.

CES is not just a physical pain but is an equally big mental pain too. If the condition does not get improved even after surgery the people may get depressed seeing the chronic effects of the syndrome.

People with untreated or improperly treated CES may not be able to work or live a normal social life because of inability to walk, severe pain or incontinence problems or sensory loss or weakness in legs and feet. This may even affect their relationships and can put them to emotional trauma.

Sexual dysfunction which is one outcome of CES can lead to difficulties in relationships with the patient’s partner.

In fact, living with the pain constantly is a big trouble which will intervene in the normal course of life. The pain may get worse during cold and especially night which totally destroys normal life.

So, what is needed is to give constant physical and mental support to the patients of Cauda Equina Syndrome. The friends, family and especially partner of the patient should not give up on them and help them overcome the emotional and physical trauma of the surgery.

There are various ways through which the condition can be improved as- medication and drug therapy.

Apart from that, the patient should be taken to a counselor to keep his morale up and make him feel good so that there is considerable improvement in the condition on the mental level too.

The people close to patients should regularly come to see him or her and involve it in the social life as before to not to make it feel more terrible about the whole situation.

There are also formal groups organized by people who are going through the same trouble and have a great affinity and understanding for each other’s pain. So, the patients should be made to join such groups to improve their mental health which eventually leads to improvement in the physical condition as well.