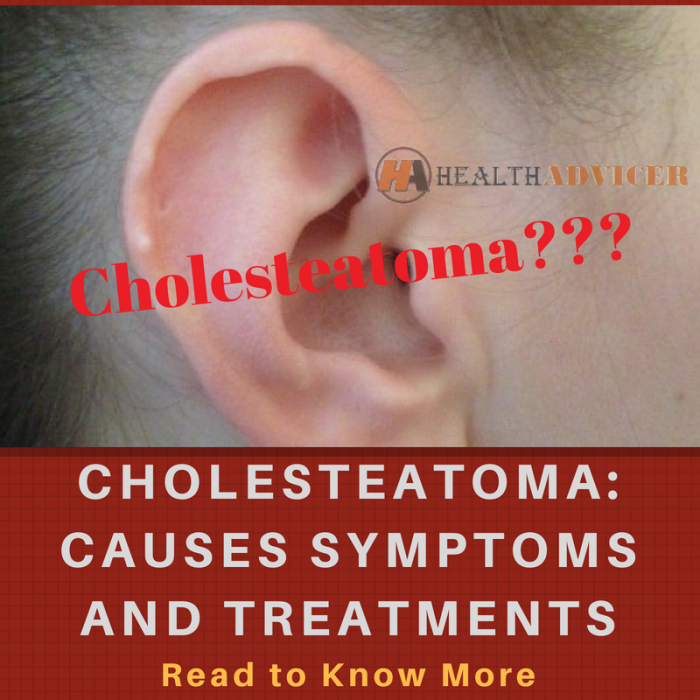 Cholesteatoma or ‘the skin in the wrong place’ occurs in the middle of the ear. This is a rare disease which could cause deafness and if not removed by surgery could be fatal.

Even after 300 years of its identification, there is still no exact pathogenesis for the formation of cholesteatoma. When this simple infection in the ear is left untreated with proper medication it could lead to morbidity, deafness, and death due to the damage of the Eustachian tube and cranial nerves. Continue reading if you do not want to be deaf.

Cholesteatoma often exists in a not much aggressive state for many years undetected until the cyst or sac forms. When untreated with a proper diagnosis it could affect ear bones causing loss of hearing and also serious consequences.

Cholesteatoma in an advanced stage breaks the ear bones and the infection is severe enough to cause damage to temporal bones on the back of the skull resulting in complications of CNS or the central nervous system. This potential fatal lesions cause’s brain abscess and meningitis.

The symptoms of cholesteatoma were reported in a case by French Anatomist Du Verney way back in 1683, Several etiological descriptions due to its pearly and tumor-like appearance and greasy in nature due to the liquid formed in the cyst were coined overtime. Only in the year 1838, the German Anatomopathologist Johannes Muller coined the term cholesteatoma. Even this name reference does not pertain to the contents of the lesion which is neither of cholesterol or neoplastic in nature. The general misunderstanding among the public of the disease is the reason that the name cholesteatoma still holds ground.

The causes of cholesteatoma can be categorized into two types.

This type of cholesteatoma is due to genetic reasons. It is formed as white mass behind the eardrum even before the birth of the child. This has no symptoms of inflammation or otitis media. This develops in the childhood and if identified at an early stage and treatment is given or surgery is done to remove the tumor or lump to save fatal damages.

The acquired cholesteatoma are of two types.

This occurs mostly in childhood and usually starts with the retraction pocket which is accumulated with desquamated epithelium and keratin. This is due to the improper function of the Eustachian tube of the eardrum or the tympanic membrane creates retraction pockets due to the low pressure in the middle ear and the nasal pharynx.

This occurs due to the migration of epithelium and keratin to the middle ear due to the preexisting peripheral defect in the eardrum or the tympanic membrane which causes infection and trauma.

There are several theories put forth by various scientists across the world regarding acquired cholesteatoma.

Under the influence of infection, the basal cells of the germinal layer of the skin proliferate and lay down keratinizing squamous epithelium.

The epithelium from the outer drum of the ear through a pre-existing perforation moves to the middle ear to form cholesteatoma.

Invagination of the tympanic membrane of the attic to form retraction pockets to be filled with desquamated epithelium and keratin to form cholesteatoma.

This is the most common and widely considered as the main reason for cholesteatoma. The Eustachian tube is the canal which connects the ear to the nasal pharynx and upper throat.

This retracted pocket is the basis of cholesteatoma which is accumulated with desquamated epithelium and keratin.

When these retracted pockets are untreated they form cysts which overtime due to infections starts flowing of foul smelling liquid.

Since there is no blood circulation in cholesteatoma systematic antibiotics cannot be reached to the center of the affected area. Only topical antibiotics around the main infected area could be applied. This too over time loses its purpose over otorrhea and surgery becomes the only option.

Cholesteatoma could cause some serious damages :

If surgery is not done at the right time cholesteatoma could cause the following serious damages :

Due to severe cholesteatoma, the ossicular chain may be destructed. This results in the damage of the ossicles which transmit the sound to the inner ear which results in hearing impairment or deafness.

An advanced state of cholesteatoma can erode the bones and move into the facial area causing facial muscle paralysis. This occurs on the side of the affected ear. This could cause a lot of discomforts and needs to be treated immediately.

Due to the intracranial pressure of cholesteatoma brain abscess occurs. This affects the brain and could be treated accordingly failing which could be fatal for almost 10 percent of affected people.

Meningitis is classified as a medical emergency due to its proximity to the brain and spinal cord. The infection of the cholesteatoma can spread to the brain from the back of the skull and cause the microorganisms to cause meningitis. This is because cholesteatoma has the capacity to eat away the bones. Meningitis which is a life-threatening disease should be treated immediately for preventing fatal damage.

The symptoms of cholesteatoma could vary according to the severity. Though undetected for years it could occur in only one ear of the human body. The two types of symptoms are

Initial stages of cholesteatoma can cause the following symptoms :

Advanced stages of cholesteatoma can cause the following symptoms :

The various types of diagnosis of cholesteatoma :

The general diagnosis of cholesteatoma starts with the infection in the ear. A general physician with the help of an otoscope a clinical instrument with a light on one end will examine the affected ear. The physician will check if the infection is due to cholesteatoma. Also, the doctor will check the hearing capacity of the affected ear to diagnose the extent of the damage. Depending on the general diagnoses the doctor will refer the patient to an ENT or Ear Nose and Throat Specialist for further diagnoses and treatment.

On the confirmation of cholesteatoma, the following key factors of diagnoses are considered.

During the otoscopic examinations, special attention should be given to the origin of acquired cholesteatoma the attic and posterosuperior quadrant locations of the eardrum.

Image evaluations should be done for suspected recidivism cholesteatoma for further confirmations.

Computed Tomography scan is the imaging modality employed on the temporal bone to determine the extent of the damage. This HRCT or high resolution computed tomography of the temporal bone assist the otologists in surgical planning.

The CT scans of the temporal bone are the indispensable tool for the effective surgery. Repeated examinations of the CT scan for anatomical abnormalities, possible osseous, extent of damage and other complications like labyrinthine fistulas prior to surgery is essential.

HRCT scans are an indispensable tool as far as the temporal bones are concerned. But when it comes to tissue such as labyrinthine or intracranial involvement its ability is limited.

MRI or the Magnetic Resonance Imaging is the method to diagnose cholesteatoma developed in the last decade. There are two types of imaging sequences in MRI algorithms which led to the new tools in diagnosing cholesteatoma.

Types of imaging sequences in MRI:

Out of these two DW is relatively considered unnecessary due to the superiority of the DP imaging sequence tool. This is because of the 94 % specificity and the overall sensitivity of the DW tool as a result of a meta-analysis to evaluate the cholesteatoma.

The MRI imaging sequences are more preferred with children for their non-radioactive properties so as to prevent radioactive induced cancers.

In the DW imaging sequence, two distinct sequences are used to evaluate cholesteatoma.

Of these two the non echo planar images or Non-EP images are best suited for evaluating lesions even to the size of 2 – 3 mm in size. The improved spatial resolution, fewer artifacts, and higher image matrix have made Non-EP images the best in identifying recurrent or residual cholesteatoma. This EP and Non-EP imaging techniques have reduced the rate of second look surgeries of cholesteatoma from 50 – 60 % to 10 %.

To wait for the lesions to come to the size of 2 – 3 mm in some patients is difficult and hence second look surgeries have to be individualized for patients. Also, care should be taken for wrong DW imaging signals for wrong substances like cerumen, bone dust, dental braces and abscess cavity identified during previous surgeries.

MRI should be used only with the following specific problems :

Audiometry should be performed frequently prior to surgery to prevent permanent hearing loss. This is to evaluate the silent Cholesteatoma also called as the conductive cholesteatoma or cholesteatoma hearer which is the condition of hearing even after the damage to the ossicles. This is done by bridging the oscillar gap by cholesteatoma for transmission of the sound. Air and bone conduction, the speech discrimination scores and speech reception threshold should be determined within a few weeks of the proposed operative procedure.

Tympanometric testing is conducted in conjunction with the audiometric testing to evaluate the condition of the middle ear and also to indicate the eardrum perforation which is less in children when compared to adults.

Treatment for cholesteatoma is minimal due to fact that there is no blood circulation. The systematic or topic antibiotic treatment could yield fewer results and after a period of time become ineffective.

Some antibiotics like fluoroquinolones help in suppressing the inflammation and pain. But even ciprofloxacin and levofloxacin become ineffective in due course of time.

Cholesteatoma is undetectable for a long period of time by which it forms deep-rooted in the ears and makes it impossible for any treatment once detected. Hence early identification, especially in children and proper diagnoses, is the best way to treatment of this disease.

The final option is the surgery after proper diagnoses.

The surgical treatment after earlier identification and proper diagnoses is more essential for children due to the following conditions :

Several clinical considerations must be taken into account when surgical treatment is finalized. Each and every technique has its own advantages and disadvantages. Always a second opinion should be taken as each and every doctor has their own expertise, preferences, and choices of surgery. The best surgical method is only then being chosen.

Medical practitioners should endeavor to be flexible when choosing surgical options with their vast expertise. The outcome of the complicated surgery like one for cholesteatoma which involves hearing issues apart from the complete cure to the ear making it dry, trouble-free and recurrence-free ear.

There are two types of common surgeries for cholesteatoma. These mastoidectomies are both helpful in curing it with different methods.

CWU or the Canal Wall Up Mastoidectomies is the surgery which maintains the integrity of the contours of the ear canal by removing all the mastoid air cells. This technique of preserving the canals have a lot of disadvantages including creating a cavity, vertigo, water exposure limits and also the high rate of recidivistic diseases.

CWD or the Canal Wall Down mastoidectomies is surgery done to remove the bony posterior canal wall by creating a common cavity which combines the ear canal and mastoid.

There is a lot of conflict of opinions among physicians regarding the pros and cons of CWU and CWD mastoidectomies. But generally, CWD is preferred for its low rate of recidivistic disease.

To overcome the difficulties in performing the CWU and CWD many modified and customized methods were introduced:

The outcome of these surgical methods are yet to be established and needs further proof for long-term use.

Even after surgery, periodic checkups should be done to control the after-effects of surgery and also to check the recidivistic disease. Hearing impairment and deafness are the real causes of an ineffective surgery. Thus periodic checkups by audiometric methods are necessary to prevent deafness.

A survey indicates that only 9 to 12 adults and 3 to 15 children in 100,000 are prone to acquired cholesteatoma and this is far less in the case of congenital cholesteatoma.

Hence there is no need to panic of the effects and sufferings due to cholesteatoma until unless the ear is not infected for a prolonged time.